Two weekends ago was the first annual Denver Botanic Gardens’ Urban Homestead Tour.  I was able to go on the tour and be a community sponsor.  It was so much fun to see what others around Denver were doing at their homes.  Each home that we visited was doing something different, and I thought everyone else might be as interested as I was to see our movement moving in the Mile High City.

The first homestead that we visited were neighbors of ours… we could have walked there, but I had no idea this place existed.  We live in an urban area.  Our lot is pretty small (in fact only two of the places we visited had lots as small or smaller than ours).  So I was surprised to come upon the gem that Leigh and Diana have created in my ‘hood.

Leigh is quite the craftsman.  He built the house on the acreage (!) himself, including the above green house.  The big trees were all on the property already, but the cherry, peach, plum and apple trees were all planted by the Bray’s.

Inside the green house they are growing bananas, among many other beautiful plants that we’d never get to survive otherwise in Colorado.

The Bray’s purchased the property from an elderly neighbor (Leigh said she told him she’d never sell), they worked with the city to narrow a portion of the ditch from 20 feet wide to 8 feet wide and at the same time got a the lane behind their property turned from a road into a walking path.

The Bray’s have a large garden area.  The older garden is in the background, and a newly dug garden, for 2013 is in the foreground.

Beyond the trees is where the ditch flows.  Calling it a ditch seems silly – it’s a beautiful, clean creek banked by green grass.  They even have two bridges over it and a little row-boat.  The bee hives are on the other side.  I wish I had taken a picture of it.

The Bray’s invited my boys to use the rope swing over it; I didn’t let them, it was our first stop.  But they did take them up on the offer to play in their tree house and zip-line in the yard.

The Bray’s daughter (pictured with my little super hero-cowboys) convinced her parents to get chickens.

Leigh naturally built the coop himself.  It’s a great design; wired for brooding chicks and a heat lamp for the winter.  Egg boxes that are easily accessible and a fully enclosed run. 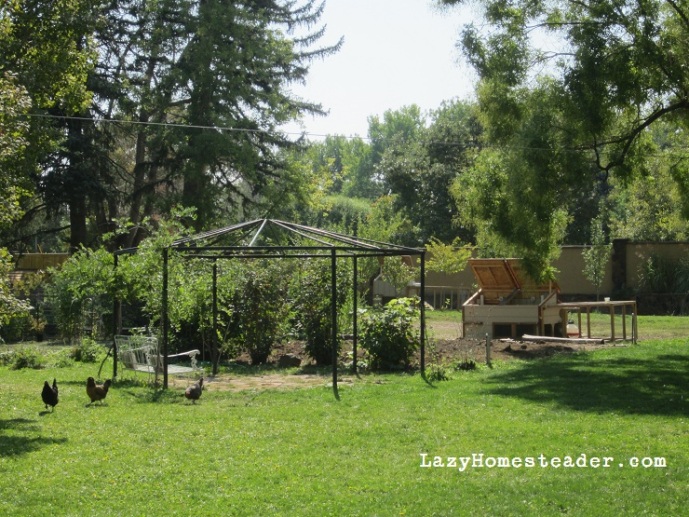 See that second coop in the far background?  (click on the picture for a better view).  Leigh and Diana sell the coops that Leigh makes.  They offer three fully assembled sizes to house from 2 to 12 hens, AND free delivery up to 50 miles from Denver.  They can even be rigged with solar panels to power the lights.  Check out their website: chickencoopsofcolorado.com

The next stop took us into the heart of downtown Denver.  Matt McClusky of Foodie Call Catering opened his 2500 square foot garden to visitors.

Matt is using his lot to its fullest.  I loved the hanging tomato plants all along his porch at the front of his house.

Just beyond the fence, all along the front of the house Matt has veggies growing:

If you walk around the side of the house, you’ll see how he keeps pest out of the garden and nutrients in.  My boys were totally scared of the scarecrow, and this is just one of the many compost bins I photographed on the tour. 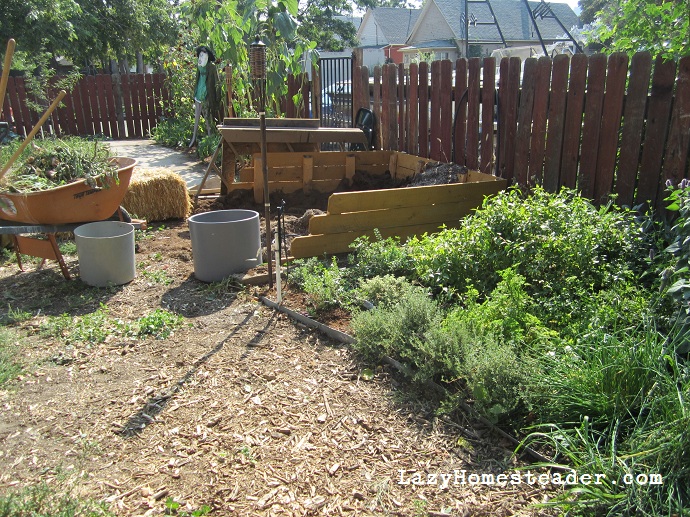 All along the North side of Matt’s property, he was growing a lush vegetable garden.  I lost track of how many varieties, which included beautiful eggplant and broccoli plants taller than Henry.

Here you can see how he uses trellises along the fence line. 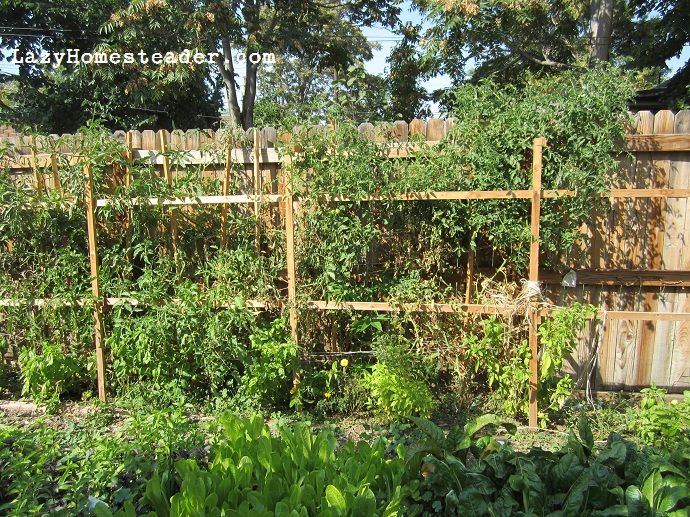 And here are more beds running the full length of his lot. 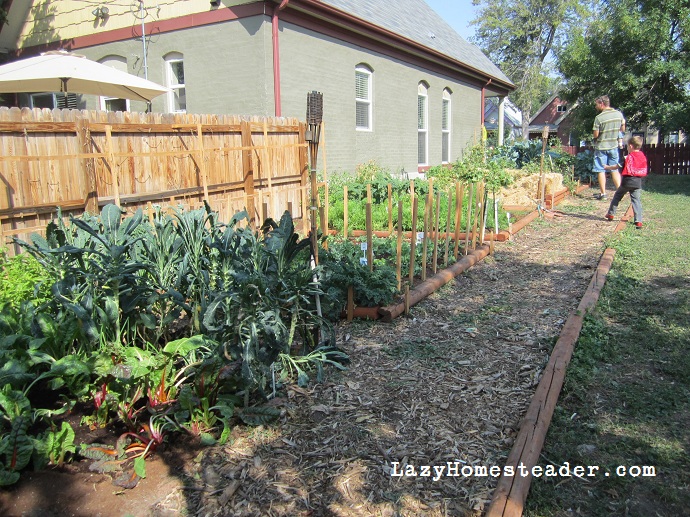 Finally, here are the super tall pole beans with a beautiful herb garden growing at the base.

The gardens and homesteads we saw on the tour were just amazing.  This is the first of three posts that I plan to share about the tour.  I’m so grateful that all the participants agreed to let me photograph and share their homesteads here, as well as opening their yards to the public.

Edit:  I mistakenly stated in my original post that the Bray family had the city ditch moved, however, the ditch was hand dug in 1863 and it has been in the same place since that time.  Instead, the Bray’s worked with the city to narrow the ditch at the corner of their property back to its original size (8 feet wide) as stated above.  I apologize for my mistake.