WHEW!   I think I need someone to talk me off the edge!  This No Spend thing is hard.

While Erica is up there in Washington not spending, I’m here in Denver struggling.  For some reason, I’ve found this challenge to be much more… um, challenging than I expected it to be.  The only reason I can think of is that my habits have gotten quite relaxed and pinching pennies has become painful for me again.

The Good: Rick stuck to his budget for the hair cut, and we got into the football game for only $10 instead of the twelve I budgeted for.  We had to use cash for the game of course, so we pulled a twenty.  Rick used $7 of that for bread at the bakery.

I used card stock, scrapbook supplies and envelopes that I already had around here to assemble invitations for H’s birthday party.  I only made four of them; one for each of his grandparents and great-grandparents, and one for me to keep.  The rest of the guest list got email invitations.  Total cost was zero (well, three stamps, but I already had those).

The Bad: Originally, I had hoped for wiggle room in the grocery store budget.  Unfortunately, we ran out of toilet paper.  And, C got a diaper rash which pushed me to use disposables for a few days.  We also use disposable diapers at night, so we needed more of those too.  Yeah… that’s twenty bucks down the crapper.  Seriously?  Two-thirds of my grocery budget for poop?

Last week, I mentioned that I forgot to budget for buying chicken feed.  Because our co-op is so far away, we buy eight weeks of feed at one time.  That was $60 that we did not include in our original budget.

The Ugly: My grocery receipt contained toilet paper, diapers, milk, butter, 1 can of coconut milk, cornmeal, and cheese.  Rick got home, burst out laughing and asked where the fruit was.  I didn’t feel bad, he stole three dollars cash from the money we pulled out for the football game and spent it this week.  He won’t tell me on what, so I’m pretty sure it was candy or, more likely, a pastry.  I’m insanely jealous over that three dollars.  I’m coveting the pastry.

Oh, and then he tells me that he’s in charge of breakfast for his Friday morning meeting, and his company is buying breakfast burritos from my favorite place.  I think I hate him.

What did we spend this week?

I am worried.  I don’t think we can make it.  I’m really debating about transferring the chicken food money from our savings account and not counting it in the month’s budget, but I don’t know if that’s cheating or not.

As it stands, we have just over half the month to get by on a quarter of the month’s budget.  If I add that sixty back in, we’re looking at 44% of the budget left for the next two and a half weeks.  My goal was to save $1000 this month, so that’s really just robbing Peter to pay Paul, right?

No Spend October: Week One

Ok, so I had planned on doing this wrap-up on Monday, but since NWEdible is doing wrap-ups on Fridays, I thought I better bust it out.

I’m usually a pretty good budgeter, but in this short first week, I realized I missed a few items in the budget for the month.

Enough blathering on about things I forgot to account for.

I did have some success this week.  I went to a kids’ resale shop to look for shoes for H.  I also took some clothes to sell with me.  After what they bought, I was able to get H some shoes and the store paid me $4.76.  WOOHOO!  E also badly needed new pajamas.  All the ones he had were waaaay too short.  Like belly-sticking-out-of-his-shirt too short.  So I used that savings to buy him new pjs.  They were $16.26.  I deducted the $4.76 from that, so we did really well in the clothing budget category.

What did I spend this week?

I know.  The haunted house.  It’ll be a toughie to make up.  And I’m feeling guilty for buying it.

How are you doing with your budget?  What successes or challenges did you meet in your first week?

Have you all seen the No Spend Month that NWEdible is heading up for October?

The premise of the challenge is to set a budget for one month, not including your regular bills (mortgage/rent, utilities, etc.), that allows you to save a bundle of money by… not spending it.  The budget should include money for food, gas and whatever household expenses you normally have.  But this budget is radical. You are cutting your expenses way, way down.  Down to nil, or as close to it as you can manage.

Like, instead of spending $750 on food for the month, you are only going to spend $120.  Instead of racking up the miles in your SUV, you rack up the miles on your bike, because that gas costs money.  Instead of getting coffee at the drive through, you brew it at home.

Then, at the end of the month, you have a pile of money that you saved.  Maybe enough to jump-start that emergency fund or make an extra house payment, or pay off a credit card.

To join the challenge, you have to do three things: one, set the budget; two, track your expenses; and three, set a goal for what you save.  It’s been a while since I’ve joined in on a challenge.  This one seems a bit overdue for us.  Doing a no-spend month is a great way to hit the reset button on out of control spending. 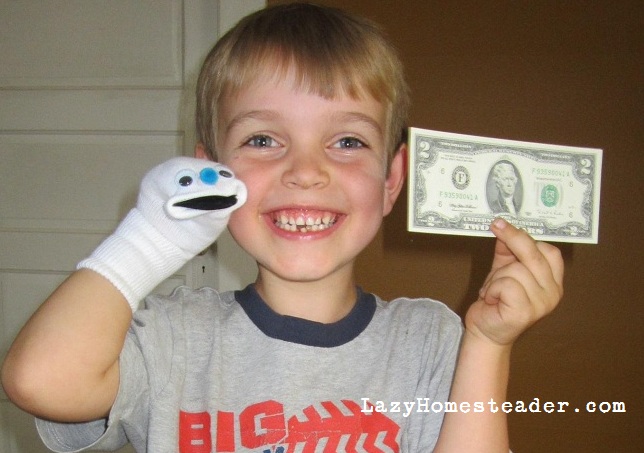 I read about the challenge over the weekend and decided to go for it.  But I didn’t actually get off to a great start.

Yesterday morning, it started raining at 6:00 am and Rick wanted a ride to work instead of getting soaked on his bike.  So I took him.  The boys, used to going to the bakery on mornings we drive Rick, begged for pastries.  I, weak from lack of coffee, gave in and spent $10 on the way home for buttery, flaky goodness.  Later, as I was cleaning up the crumbs, I remembered it was October 1st!  ARGH!   It’s NO SPEND MONTH!  $10 in the hole already.

It’s ok.  The whole month isn’t shot because of one slip-up on the first day.  I know we can make the ten bucks up later.  We actually used to run a really tight ship around here.  But as we’ve paid off various debts (two credit cards, a car loan and a student loan done!  Woo!), we’ve gotten a lot more relaxed about our spending.

Our budget for October is $335.  We are a family of five, and to be honest, I think we could go lower.  However, we have a few commitments for the month already involving friends and family from out-of-town, that I just don’t feel good about backing out of.  Even so, this will allow us to save $1000 this month.

I plan to put that $1k in a separate savings account towards an emergency fund.

Because I’m always curious how others come up with their budget numbers, I’m going to share mine more specifically with you.

For food, I know we can mainly eat out of the pantry and freezer, except for dairy and flour.  So I budgeted $30 per week for food.  This actually allows for some wiggle room, but I figure that’s a good thing.  I’m hoping I can get some Halloween candy to give away out of this too.

For gas, I cut what we normally spend in half.  This pretty much has no wiggle room, and I think it will be the toughest category for us.  Especially if we get some bad weather.   $60 is about a tank and a half for the month, plus the 3/4 of a tank right the 4Runner is at right now.

Our dining out budget would have been a zero for the month, but since I already blew that yesterday, I accounted for the ten dollars already spent.  Otherwise, we’ll be cooking at home and Rick will brown bag it.

I budgeted $30 for Rick’s hair cut.  He’s been putting it off for a couple of months and is getting pretty shaggy.  When I proposed doing the No Spend month, his only request was an allowance for a hair cut.

Now comes the previous commitment part.  We had already committed to a high school football game (cheap), a double date (yay – it’s been so long), and a pumpkin patch (it is October after all).   I figured $12 for the game if we fill the kids up before we go and bring snacks from home.  I’m budgeting $50 each for the date and the pumpkin patch.  That’s cutting it a bit close, but I really want to try to stick to it.

I plan to keep track of how we’re doing and report here on it once a week.

What about you?  Are you down with No Spend this month?

Please comment and tell me if you are going to join in on the challenge, what you are budgeting (you don’t have to get all specific if you don’t want), and what you want to do with your pile of saved dough.