Last weekend while at my in-laws’ house, I noticed that my mother in-law’s very ripe cherry trees had not been picked.  Lucky me, she told me to have at it!

Rick’s younger brother, was there and he helped us pick.  The cherries were so ripe that some were almost sweet.  As we all picked, the adults all remembered being kids, waiting for the cherry trees to ripen (we had cherries at the house I grew up in too), thinking that this year, this year, the cherries would be sweet.  I always expected them to taste like a maraschino cherry.  Of course, they never, ever did. They were always sour and I was always disappointed.

As a child, I assumed that these small, sour fruits were not real cherries.  That they were just for birds and to look pretty.  I didn’t know how good they really were. Rick, on the other hand, had some home-made pies and jams made from his backyard trees, but still most years the harvest went to the birds and squirrels, and his largest memory of the trees was putting the pits to use in his sling shot.

Maybe that’s why he never thought to mention to me that his parents still had the cherry trees.  Most years, my mother in-law said, they let a passing neighbor pick the trees.  (!)  I had been considering going to a pick-your-own orchard this year to buy some, when I noticed her trees.

We didn’t even pick half of the two trees, yet we came home with an incredible haul of gorgeous sour cherries. 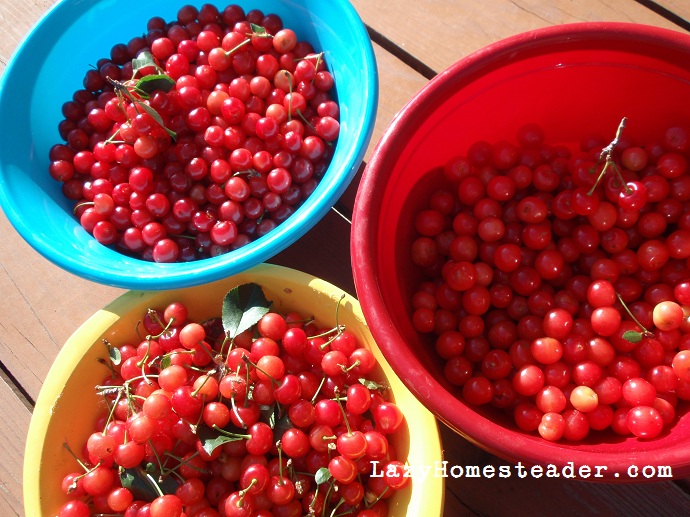 My younger self would be so jealous of me now.  Now, I know how to turn these babies into the sweet, delicious fruit that I always hoped they’d be.  See sour cherries (sometimes called tart cherries) are also know as PIE cherries.  (Once I tried making a pie from bing cherries.  Yeah…. horrible).  Sour cherries will give you a pie to die for.  We ended up with eight pounds – PITTED.

After washing and pitting them, I immediately put six cups in the freezer for a pie.  The rest I divided between the jamming pot and the dehydrator.

Dried sour cherries are pretty expensive to buy in the store.  But they are delicious in baked goods, rice, salads, sauces, over pork, granola and trail mix, or just plain as a snack.  We hope to dip some in chocolate for Scott as a thank you for helping us pick. 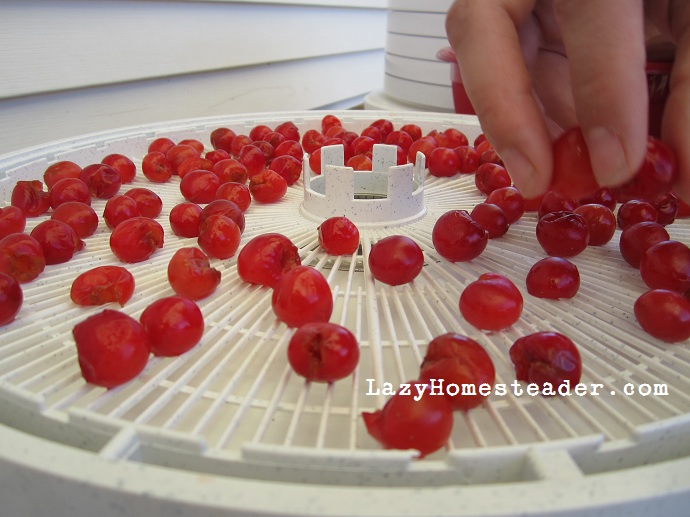 Drying the cherries was incredibly simple.  Just wash and pit the cherries, and then spread them on the rack of your dehydrator.  make sure they each have a little room so they don’t end up stuck together.  I tried to pick the best, most perfect cherries to dry.  Any squashed or under ripe ones, I tossed back into the bowl to be made into jam.  Our food dehydrator puts out quite a bit of heat, and since it has been so hot here, I set it up on an old plywood table on the back porch to do its thing.  I set the dehydrator for 135° and let them dry for about 24 hours.

We dried about three pounds of pitted cherries and ended up with just about a pint after they were dry.  You have to watch them towards the end of the drying; you don’t want them to get crunchy.  They should still be soft, kind of like a raisin.  Yum.