When we first researched keeping chickens, my only hesitation was the idea of having to clean a coop weekly.  I used to have a parakeet, and I hated changing his newspaper tray, and I hated cleaning my hamster’s cage too.  I was dreading having to clean a coop.  I envisioned this, happening weekly (by the way, she was cleaning a coop inherited when she moved to the property for the first time).  Then, I ran across something describing the deep litter method, and I knew I had found the solution.

We clean our chicken coop (specifically the hen-house) twice a year.  And no more.

And the coop does not smell.  In fact, when we participated in the Denver Botanic Gardens/Denver Urban Homesteading Chicken Coop tour, everyone remarked on how our coop did not smell.  I didn’t clean it before the tour, because I wanted to show what the method off and let people see what it looked like to have chickens in real life.

What we learned was that we were, at that time, the only chicken keepers on the tour using this method.  Every other owner had told the tourists that they cleaned their coops weekly.  We were surprised by this and actually started making a joke of it, calling ourselves the lazy chicken owners on the tour.  People laughed and that’s how I actually came to the name, the Lazy Homesteader.  😉

Here is how the method works in case you are like me; allergic to hard work involving poop.

Clean your coop one fall day and then put down a layer of dried leaves or pine shavings or some other kind of litter (not straw – it’ll stink to high heaven).  Then you let the chickens poop on it.  Then when it’s thoroughly covered over in poop… 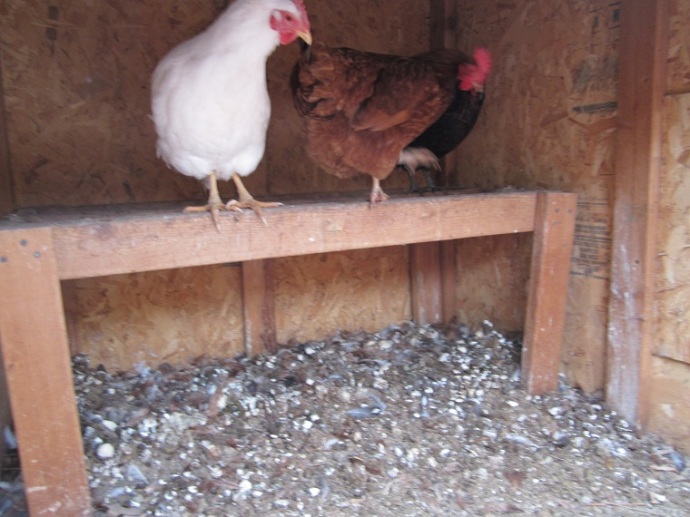 Put down more shavings or leaves. I just throw it in – I don’t spread it nicely or anything.  I’m not touching that crap.  😉  The chickens will dig through it and spread it around anyway.

Repeat until spring comes.  Note that I mainly just put litter down right under the roosts.  If it’s very rainy or snowy, we put their food and water inside the house (usually we keep them in the run) and we don’t want them to throw litter in the food and water.

Finally, on a nice day, when you feel like doing it, bring the wheel barrow over to the coop, scrape it all out, and dump the decomposed poop/leaves/shavings mixture into your compost bin.  It’ll be mostly all composted anyway.  Then clean out the coop and put down a fresh layer of shavings or leaves (if you have any more).

You are basically composting in the bottom of the hen-house.  And as you learned a couple weeks ago, compost generates heat, perfect for helping your flock stay warm during the winter.

And I can totally handle cleaning only twice a year.

57 thoughts on “Deep Litter Method for the Lazy Chicken Keeper”