Saturday night I went down to the capital building to the Occupy Denver protest.  Denver is one of over 1500 cities showing solidarity with the Occupy Wall Street movement in New York.

Saturday afternoon there was a march on the state capital.  4000-5000 people joined together to march down 16th street.  I couldn’t get down there in time for the march, but I went with C and Manuel, my mom’s husband, to join the few hundred remaining protesters around 6:00pm.

I’ve never been to anything like this.  The Occupy Wall Street movement is a peaceful protest, but the Denver police department and Colorado state patrol lined the streets in full riot gear.

As we walked down Broadway from Colfax, the citizens started moving into the street, chanting “Police are the 99 percent!” and the police line backed up.  I got chills.  I was almost moved to tears, and I wished I had my camera ready to get that on video. 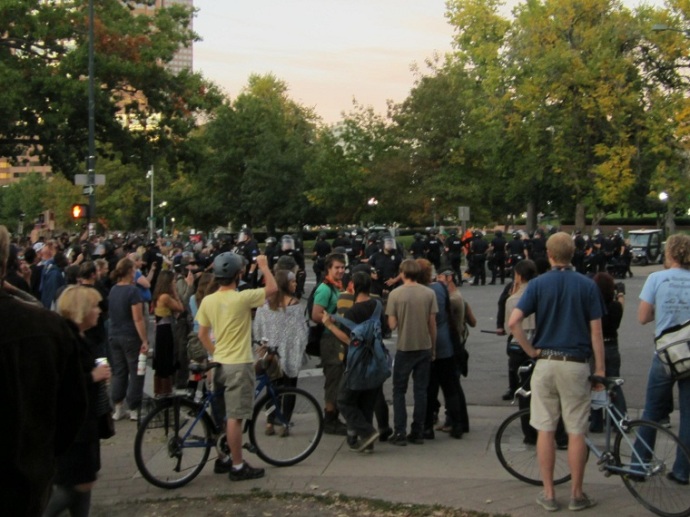 We spent some time walking around among the protesters.  We got a lot of warnings to “get that baby out of here, before they gas us.”  One guy warned us that we were taking her into a “really volatile area.”  I have to admit, after the third or fourth such warning, I was a bit intimidated.

Manuel shot a few videos with his phone and in one, you could hear a citizen shouting, “They have automatic weapons.  Why do they need automatic weapons?”  I was glad to be there and also nervous.  I wonder just how far we are entrenched in this bizarre culture of fear. In reality, it really was pretty calm. 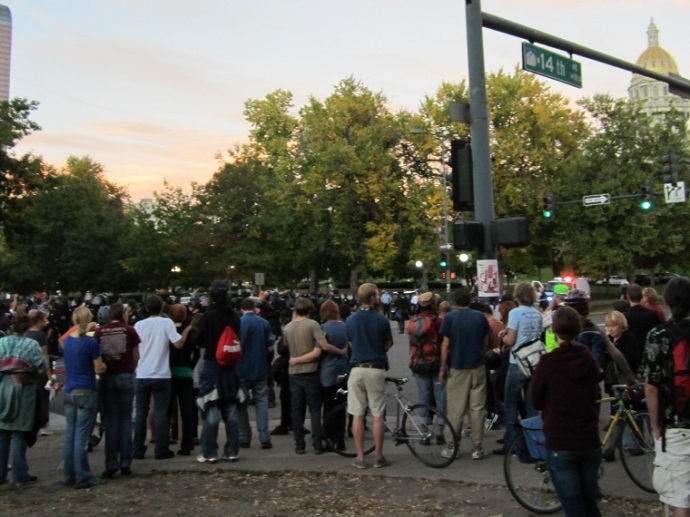 Rick and my mom were watching the news reports, and the police began making arrests.  Around 6:30 we saw two people getting arrested for “blocking traffic.”  Odd since the police were the ones in the streets, and the street was completely shut down anyway.  The citizens stayed on the sidewalks and in the park for the most part.  And after reading a few news stories I realized just how much is sensationalized. 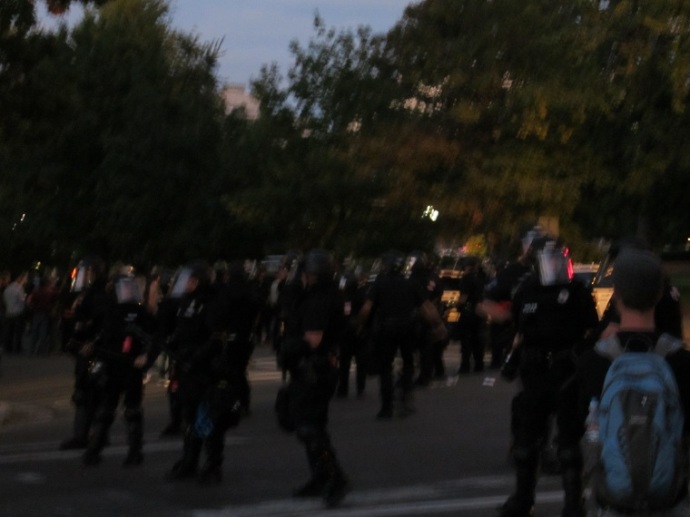 The whole time we were there, we didn’t hear any people shouting “shame” at the police.  We did however hear chants and shouts of “Protect the kitchen!” when the protestors gathered around the food tent, linking arms, to keep it from being trampled to the ground.  And chants of “Peaceful. Peaceful.” as the police formed lines and advanced on the group in the park.

We stayed until about 7:30pm when we saw several more police vehicles show up followed by a couple of ambulances.  The police had formed lines, seven or eight officers deep and started advancing on the crowd.  As Manuel and I walked back to the car, I stopped and asked an officer on the fringe of things why they were in such heavy gear and out in such force for a peaceful protest (hey, I figured they wouldn’t arrest or pepper spray a lady with a baby strapped to her).  The officers were polite, and explained their position (you know, being prepared, just in case, and all that).  Of course they are just doing their jobs. 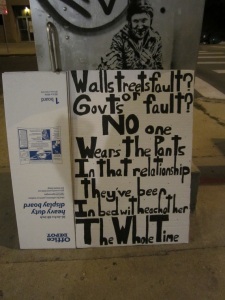 I realize that attending a protest for just an hour and  a half, and leaving when things start to get heated totally makes me the diet soda of protesters.  But it was more than nothing, and I plan to go back in the very near future without Cora.  I still won’t be able to stay – she is breastfeeding and I can only be away for so long.  But I plan to keep showing my support in little bites and chunks as I can.

There are probably a lot of people like me that might want to stand up, but for some reason they can’t be at the protest (or like me, have little kids and may not want them in such a charged environment).  Here are a few simple things that anyone can do to help, without attending a rally:

I also realized that a lot of people still don’t understand what Occupy Wall Street is all about.  And why would I be posting this on my homesteading blog?  Food Democracy Now posted that,

Occupy Wall Street will affect us all.  Here are a few good articles that might help in understanding what the Occupation is all about:

Now is the time.  Spread the word.