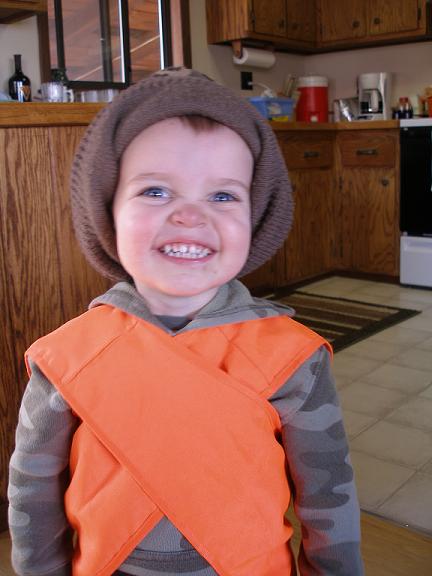 We spent the last ten days up in Kremmling.  Rick was hunting for elk.  Alas, he was unsuccessful.  But, we had a good time, and we didn’t get skunked completely!  Rick’s trophy for the week:  a squirrel tail.

No really, we did have a nice time.  We arrived last Friday afternoon.  The first few days it was Rick, H, Josie & me; Rick’s brother, Scott; Rick’s Uncle, Alan; and Rick’s grandpa, Lyle.  Monday night, Alan and Rick’s grandpa left, and Rick and Scott continued the pursuit of elk (and deer) on their own.  Meanwhile, I played camp cook.

Scott & Rick did bring home some blue grouse (Rick got four), and they took the afternoon off one day to go fishing with H and I.  We headed up to a lake near Alan’s cabin, and I fished for the first time in who-knows-how-long.  The lake is well stocked (it’s a private lake, so yes, we cheated), and we were getting strikes left and right!

I think overall we caught eight to ten fish, but we only kept four.  Scott reeled in the largest.  A real beauty.. probably at least 18″!  But it was on Rick’s line.  Thus began the great debate over who’s fish it was.  But I think the pictures speak for themselves:

Here’s a better view of his size… not counting is head of course.  Over all he was probably about 15-16″ before he was cleaned:

The other two keepers were in the 12-13″ range.  My fish and one of the smaller ones fed the four of us for dinner.  The other two (including the biggie), fed Rick, Scott, Alan, and Rick’s 13 year old cousin, Preston for lunch a few days later.  With some left over.

A good time was had in the cabin as well.  I couldn’t believe that the guys didn’t pull practical jokes or anything, but they did take turns cooking, and we enjoyed all kinds of good food up there.  Scott made spaghetti with Italian elk sausage, and Alan make pheasant-noodle soup.  Yum!

H and Josie enjoyed their time running around too, and it even snowed halfway through the week.  H didn’t like getting snow on his shoes, but he did enjoy tending the fire with Uncle Scott.

You can tell we’ve emphasized staying away from the hot stove though!

Wednesday night, Alan and Preston came back up to the cabin to continue hunting.  Scott shot at a couple of animals and missed.  Preston missed a cow as well.  Alan saw some cow elk up there, but he only had a tag for a bull.

Lucky me though… I dropped the guys off on top of a mountain and then drove down to the bottom to wait for them.  I saw three cows run from the trees and jump a fence into private land.  More than Rick saw all week.  Rick, unfortunately didn’t even see an animal that he could shoot.  Only a moose, some does, and a buck.

But we enjoyed our time in the great outdoors anyway (especially the fishing).  And after the grouse are gone, I’ll see if I can find another definition for the word vegetarian.

One thought on “Vegetarians…”