Adapting in Place… Somewhere Else

Last year in March, Rick’s company offered him a promotion which we initially turned down.  It involved a move across the country and we weren’t really interested in relocating at that time.  They begged him to reconsider and flew the both of us in to check out the area.  I have to admit, visiting the farmers market in the first week of June to find these…  well, let’s just say Adam’s fruit wasn’t nearly so tempting. 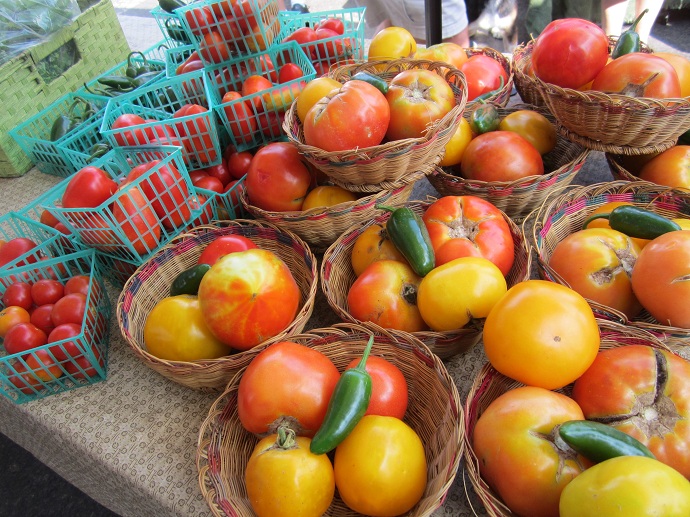 Some of you might know of Sharon Astyk and have read her concept of Adapting in Place.  It’s a concept that we’ve been working toward achieving for a long time here.  All last summer we confronted the question of how to adapt in place when you don’t know where that place is/will be next year.  And really, is it wise to give up all the work we’ve done here and move to a completely new climate?  Questioning, questioning, questioning.

Rick liked the job and we both thought we could like the area, but we were also fearful of such a large change and leaving “our tribe.”  Rick put together a proposal detailing what we would need to move out there; he aimed high figuring that if he got it, it would be worth it.  We spent the summer doing projects around the house preparing to move, preparing not to move, on pins and needles, only to have them turn him down in August.

When we were turned down we were disappointed, but also relieved.  Both of us were born and raised here in Colorado.  All of our families are here (well, most of mine, I have a few scattered about).  And I have finally been feeling connected to my community here.  So many good friends have been made in the last year.

Fast forward to last week.  They called Rick back, and after some negotiating offered him more than he originally asked for last year.  The first guy they hired instead of Rick had to quit for health reasons, and the next guy has not been able to do the job.  All of this is to say we are going to be packing up the homestead and moving to San Antonio, Texas.

In less than six weeks.

It feels silly to say that this is really unexpected for us.  Last year, we spent a lot of time getting our heads and hearts prepared for a potential move across the country (not to mention the house).  We knew all along that Rick was right for the position and we knew his bosses knew it too.  We actually were surprised when he didn’t get the job after everything.

But now…  now… well now we are packing up everything we own and trying to find a place to rent in a city we’ve visited one time.

Everything we’ve heard about San Antonio has been a mixed bag.  Some love and others hate it.  I feel a bit like Rapunzel in the movie Tangled.  You know… filled with glee one moment and sobbing the next.  But a good friend reminded me that there are good things everywhere.  Thankfully, we’ve heard more good things than bad, and I know this is going to be a big adventure for our family. Ultimately, we are very excited.

We are sad about leaving behind our friends and families and neighbors.  Of course, the beautiful Rockies.  We’re a bit fearful about starting over with gardening and homesteading and community.  I am sad to be leaving my new friends in my homeschooling group and all the friends we’ve made doing the potlucks.  However, I’m finding that I’m sad about leaving behind some things that I did not expect to feel so attached to.

My beautiful garlic that I’ve been saving and growing for the last three years.  It’s already starting to come up in it’s bed full of lovely soil that we’ve built up over nine years here.  The soil.  So much work has gone into building it up.  My compost bins, both full of nearly finished compost.  Just a little TLC when the warm weather hits and it will become black gold.

Our next door neighbor who dug up half his lawn to let us plant potatoes and carrots and onions.  He doesn’t even eat them.  The two cherry trees we discovered half a block from our house on city property… right when I was this close to planting my own.  The pick-your-own peach orchard on the Western slope.  All the digging and tilling and hoeing and digging.  This is the place I first felt that real connection to my food and the earth and, well, everything.  Everything!

On the flip side, there are things that we are really looking forward to.  A fresh start, a new neighborhood (maybe one with lots of families or at least a park).  Maybe a second bathroom and a guest room.  Picking a new house with a bigger yard and the potential to grow more food, year-round.  Did you guys see that there were tomatoes AND peaches in JUNE!?!?!?

So what does this mean for the blog?  Well, I’ve had a long list of topics that are half written about.  Some will need a bit of revision to fit our new situation.  Expect to see them pop up here and there in the next two months.  But I make no promises.

We’re pretty much scrambling to pull off a cross-country move with five people in less than six weeks.  We have found a home for our bees and potential home(s) for the chickens.  We will rent in San Antonio for at least a year, so we will not be taking them with us.  We think we’re going to sell the house.  If we can.  Oh, and did I mention that Rick will be flying back and forth between Texas and Denver and will be gone for 2.5 of those six weeks?  Yeah.

So if it’s quiet for a while, please understand why.  And if you live in South Texas and have any tips for a gardener moving from zone 5a to zone 8b…. please share them.  I’m going to need all the help I can get.  It’s snowing in Denver while it’s a sunny 81° in January there.  Yee-Haw!

18 thoughts on “Adapting in Place… Somewhere Else”