Last year I posted two Halloween costume tutorials and they were a big hit.  In fact, they’ve been the biggest hits on this blog for the last month or so.  But last year, the costumes were easy.  E was a garden gnome, and H was a bat.  This year, H upped the ante – he wants to be a pterodactyl.

A pterodactyl.  Seriously.  How am I supposed to make that?!  H certainly keeps me on my toes.  Here’s what we came up with.

Originally I was going to use spray paint to decorate the costume, but after trying it on some scraps, I decided to go with felt instead.  Just disregard that can of paint there.  😉

Roll the poster board into a cone shape, centering the bottom point over your kiddos eyes and making sure he can still see.  Tape the cone so that it will be the correct size to fit his head.  This will be sort of a hat.  A cone-hat.  It’s ok if there is a little wiggle room, since you will be making ties that will be on the inside of the cone-hat. 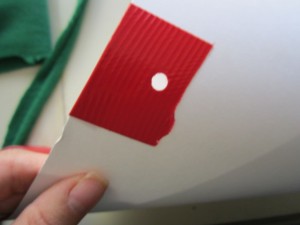 Punch two holes in the cone-hat near your kid’s ears, using duct tape to reinforce them (the holes, not the ears).  Keep in mind that the back of the cone-hat is heavy, so the holes will need to be in a place that will keep it balanced on his head.  Also keep in mind that he has hair under the cone-hat where you are punching the holes – unless you want to give him a weird hole-punch hair cut.  Yep, that’s the way we roll.

Cut the salvage edge off your fleece.  Cut this strip in half.  Cut one half in half again, and set the other half aside.

Thread the two pieces of the first half through the holes in the cone-hat.  Knot them on the outside.  Use a piece of duct tape to secure the knots to the side of the hat, so they will be as flat as possible, but won’t slip through the holes. 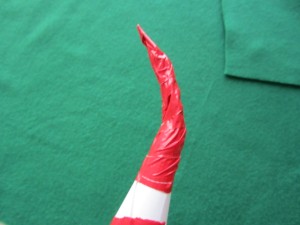 Wrap the tip of the cone-hat in duct tape.  Extend the tape past the end of the cone and give it a bit of a curve.

Cut your fleece in half along the fold so that you have two relatively square pieces.  Mine were each a yard long.  Use one piece to wrap your cone-hat.  I let a bit hang over the edge in the back of the hat, so none of the poster board would show.  Use the hot glue gun to secure the fleece to the poster board, trimming off any excess fleece as needed, and making sure your curved duct tape tip pokes through the top.

Where the fleece overlaps the point on the front of the hat, fold it over and glue it to the underside of the poster board with the glue gun.

Set your hat aside and have your kiddo lay down on the second piece of fleece. I took this picture and then decided to turn the fleece the other way, 90 degrees.  So the wings will be wider, rather than longer.  Make sure your kid is at the very top of the fleece, and then mark where his armpits are and cut two slits in the fleece, about two inches long.  Fleece is very stretchy, so don’t cut these too big, or too close to the edge. 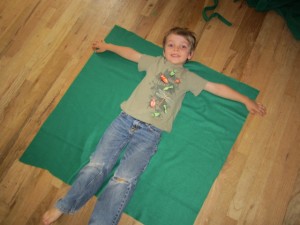 About two inches in from the edges (where his hands would be) cut two more slits about an inch to an inch and a half apart for each hand.  Again, not too big, they will stretch.

Cut the bottom of the fleece into a wing shape.  Folding it in half makes it symmetrical. 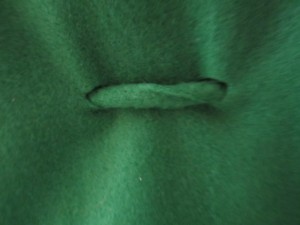 Have him put his arms through the armpit holes like he was putting on a jacket, then his hands through the hand holes so that his wrists are through and he can grip the fleece in each hand.  Now, measure where his waist is and cut two small slits about two inches apart in the center of the wings.  Thread the second half of the salvaged edge strip through these holes so that the long ends can tie around your kid’s waist.

The wings should now look like this (H is holding them up – not wearing them yet): 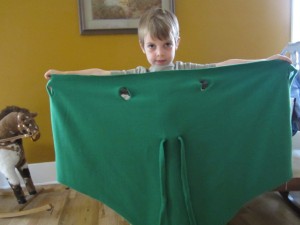 Now, using the felt, make dinosaur-like designs to decorate your wings and hat.  This is easy, since no one knows what dinosaurs really looked like!  We did these oval, spot thingies for the back/outside of the wings. 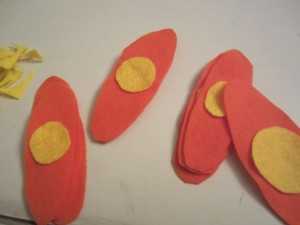 And wavy, red and orange stripes for the front/inside of the wings and for the hat.  Attach all your felt decorations with hot glue.

Now, dress your kid in some dinosaur-hue clothing appropriate for the weather where you trick-or-treat.  We used brown pants that we already had, and a greenish shirt.  If I can track one down before the 31st, I might have him wear a yellow shirt instead, because every knows pterodactyls wear yellow shirts

Have your kiddo thread his arms through the wings, tie his belt (under his shirt), and tie on his hat.  Notice that I covered the back of the belt with a dino-spot.

Oh, and if you are like me, you should just buy double the fleece you need, because you are going to make the first wings too small.  But this is actually a good thing, since all pterodactyls live in family groups…