Last year, we found the funniest costume and we really wanted it for E (who has earned the nickname “Angry Elf”).  But we couldn’t find it in E’s size.  This year, Target is carrying the costume – for $20. 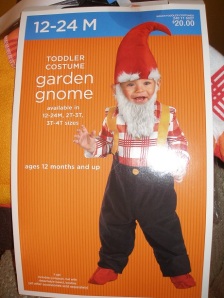 Basically these are brown and plaid, super-thin pajamas with a felt hat, fake beard and felt booties.  TWENTY dollars!?!?

So, I tried my hand at making it myself.  E already had hand-me-down green corduroy overalls and a red plaid shirt from H, so that part was easy.  Turns out, the rest was easy too.  Click the pictures for a closer view.

Step one: using two pieces of felt, trace and cut out hat shape.  Make sure to leave a seam allowance and that the brim will fit your babe’s noggin, plus a little wiggle room since the beard will be sewn into the hat.  I had to sew in little extra felt triangles since E needed just slightly more than 18 inches (pictured later).  Trace a beard shape on the back of the craft fur and cut out.  I suggest making the beard at the bottom of the piece fur so that you won’t accidentally cut the hair that hangs down at the bottom too short. 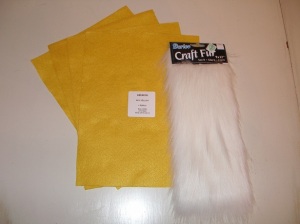 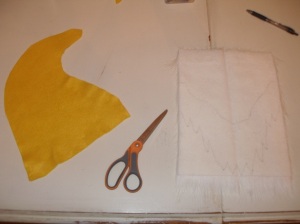 Step two: Cut two eyebrows from scraps of the craft fur.  Trim them to be a bit shaggy and then pin them to the front of the hat.  Sew eyebrows on. 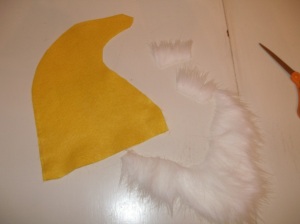 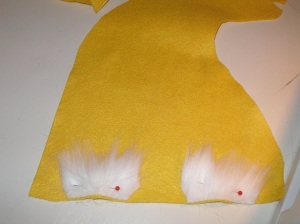 Step three: If you need to add a bit of felt to make the brim fit your little one’s head, sew triangles to the back piece of the hat.  You can see my little triangles already attached where the beard is pinned.  Cut a six to seven-inch piece of thin elastic (I had some of this left over from a earlier project).  Center, pin and sew the elastic to the inside of the back hat piece.  Pin and sew the beard ends to the ends of the elastic.  Note that I sewed them as shown in the picture, but if I had a do-over, I’d turn the beard ends out before sewing them on so they’d lay more naturally when the hat is worn.  Details, people.  😉 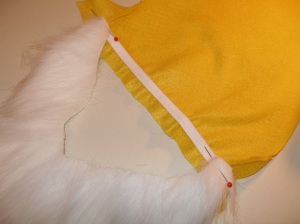 Step four:  Pin the right sides of the hat together, sew and trim up any threads.  Turn right side out.  Voilà! 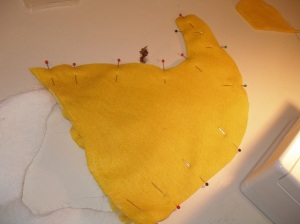 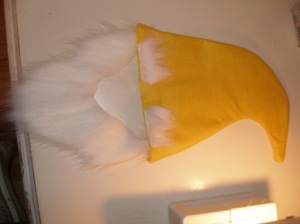 For the shoes, trace and cut a sole, a tongue and two sides of a shoe that will fit your kiddo on two pieces of felt (or on one piece and cut both pieces at the same time).  Give the sides a nice curl, so when it’s put together the toes will curl a little.  Cut two 1.5-2-inch pieces of thin elastic. 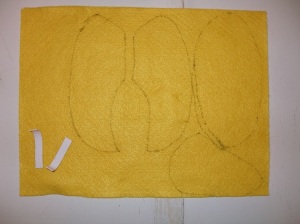 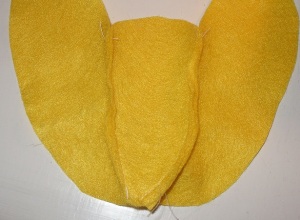 You’ve just made the “upper” of a felt elf shoe.  Although, the story books would usually have it happen the other way around… the old shoemaker would be proud.  At any rate, they should now look like sole-less shoes.  Pin the soles to the upper, again, with the seams showing on the outside.  Sew the soles on. 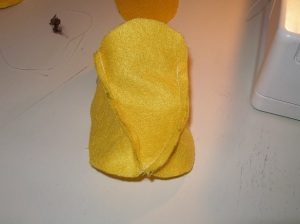 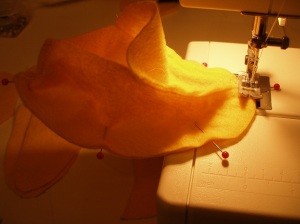 All done.  Little gnome shoes.  Not the best to use in a house with hardwood floors, unless your gnome can’t walk.  But they will do for one night on the streets, begging for candy and creeping out old people. 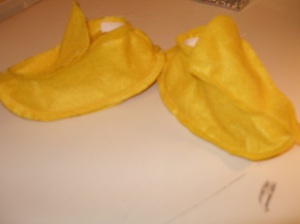 Finally, dress the Angry Elf as a happy garden gnome.  And laugh all the way back to Target to return that ridiculously over priced costume.  You just made yours for $3.69 plus tax. 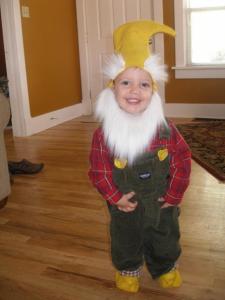 Note:  Please feel free to share this tutorial on your own blog, just include a link back here!  Thanks!